Born in Fort Worth in 1938 and raised in Arlington, Texas, Michael Garman was eight years old when he began creating little pipe-cleaner men. “I would twist pipe cleaners around pipe cleaners to make the muscles, arms and legs, and other features just right,” Michael Garman recalls “I used my mother’s sewing machine to design little cavalry uniforms and cowboy boots. I carved horses out of wood so that some of my guys were mounted. Then I’d gather up all my characters on my bed like a battle scene. I had guns and cannons and horses. Then the great battle began and my hero would get shot. I would arrange him just so, as he was dying. And I would cry and cry for him. I mean, I’d really be sobbing. And then I would scoop them all up and do it over again.”

According to Michael Garman, that was his start, the path to becoming America’s Storyteller Sculptor. Then, in 1959, Michael Garman hitchhiked into Mexico with $35 in his pocket and his Nikon camera for what he thought would be a two-week sojourn. When his money ran out, he would charm his way into a restaurant, offering to sweep the floor or other work for a bite to eat or a drink. More often than not, the owner would give him a meal and a place to sleep. “No one I asked hired me, but everyone fed me.”

He hitchhiked his way further south through Central and South America. Two years later, he had traveled all the way to Santiago, Chile where he talked his way into the School of Fine Arts. It was here that he discovered his talent for sculpting. “I would sculpt my characters, street people, vendors and such,” Michael Garman relates, “and the school would fire them for free. Then I would go door to door and sell them for $5 or $10.”

When he returned to the United States, Garman continued his vagabond lifestyle in the run-down neighborhoods of Dallas, San Francisco, Philadelphia and Colorado Springs. Initially, he continued to create one-of-a-kind sculptures. And, as his technique improved, his sculptures became more detailed. Inspired by the people he met on his hitchhiking journey, Michael’s early work depicted simple street moments – a tailor mending a garment, a woman on a bench, two ladies gossiping under an umbrella.

As he had done in South America, as soon as he had a few sculptures finished, he would load them on his motor scooter and sell them door-to-door. Though he eventually made good money, Michael admitted to a growing emptiness. “I began to miss my own work,” he admits. “I discovered that I needed to be surrounded by my little characters, my pals. I still do to this day. I can’t live without my figures around me.”

And so he decided to master the art of reproduction. “Writers do it. Musicians and filmmakers too. Could you imagine if John Steinbeck had only written one copy of The Grapes of Wrath?” Michael asks. “And only one person, one rich muckity-muck was able to read those words?! What a crime that would be. What a loss! As a sculptor, I can do the same thing that a writer or a musician does. I can publish my art. The trick is to make sure that every reproduced copy is just as detailed, just as rich and just as authentic as the original. Sure, it’s hard to master. But it’s supposed to be hard. That’s what makes it fun.”

In the late 1960s, Michael Garman moved into the SoMa region of San Francisco where he found a studio above an old print shop. “Man, I landed in the center of wino town,” Garman recalled. “I loved it.” Inspired by the neighborhood, Michael’s sculptures began to become more realistic, gritty, and honest. Soon he began working at a local theatre company. It was here that he learned stage craft, illusion, as well as good business. “It was an important time in my life; that was my Harvard Business School,” Garman relates.

After years spent as a real-life vagabond throughout North and South America, Michael Garman eventually settled in Colorado Springs in 1971. It was here that he perfected his gritty, Americana style. He also began a 40-year project to bring to life his vagabond experiences with a new art form – sculptural theater.

He began work on Magic Town in 1975, and opened it 10 years and 1 million dollars later. “It’s a work-in-progress,” he admitted. And over the following three decades, Michael has added magical illusions, holographic effects, detailed alleyways and more. “Think of a 3,000 square-foot dollhouse,” Michael describes. “A gritty blend of Walt Disney and Norman Rockwell.”

Peek into a window and you might see a woman teaching piano lessons. Then the lights fade. A few seconds later, the lights come up and all the figures in the scene have changed. Now, as you peer into the window, you discover Michael Garman himself, back in his San Francisco studio sculpting a favorite piece – Flying Leather.

Each scene captures a moment in time – a pool player leans into his shot, hoboes warm themselves by a garbage-can fire, a baseball team celebrates their victory at the local pub, three men sneak into the alley to play craps, and a weary short-order cook steps outside for a smoke break as a pretty girl plays the Wurlitzer.

In addition to building Magic Town, Michael Garman has dedicated the past fifty years to creating hundreds of sculptures that honor American heroes from all walks of life. Among his many sculpture series – Early American, Military, Firefighters, Linemen, Law Enforcement, Western, and many more – a theme emerges. Michael Garman’s art pays tribute to the extraordinary everyday heroes all around us: the firefighters, soldiers and police who run into danger, the doctors who treat our wounds, the lonely cowboy facing the long trail ahead, and the down-but-never-out street character with a twinkle in his eye.

All of his nearly 500 sculptures are reproduced by hand in Colorado Springs, USA. Michael Garman’s goal has always been to tell an honest story, recreate it in an honest way, and sell it for an honest price. This is Michael Garman’s “Art for the People.”

Passing of an Icon

Sculptor, businessman, and icon of the Pikes Peak region, Michael Garman passed late on the evening of October 8th, 2021, in Colorado Springs.

Michael Charles Garman was born May 15, 1938, in Fort Worth, Texas. He was the youngest son of Harry and Loma Garman.

For more than 50 years, Michael Garman called the Pikes Peak region home. He opened his first Colorado-based studio in Manitou Springs in 1971. He later moved his production studio and gallery to its current home, The Garman building, at the corner of Colorado Avenue and Colbrunn Court and in the heart of Old Colorado City. The Garman building is also home to Michael’s seminal work, Magic Town, a 3,000 square foot miniature city and sculptural autobiography. Throughout his long career, Michael sculpted thousands of pieces capturing the heroic American spirit.

Michael had battled illness and deteriorating heath for many years. Michael had suffered a severe stroke on the 14th of September. The lasting effects of which he was having difficulty recovering from. On the evening of October 8th Michael decided to end his life as he had lived it, on his terms. Michael was 83 years old.

Before his death, Michael Garman admitted to living a bold life with no regrets: “Along the way, I’ve made some beautiful mistakes, but I learned from each one of them. I’ve never been frightened of life or, for that matter, of death. That’s probably why I’ve been able to live – to really live. And it has been a hell of a ride.”

Adventures of a Vagabond Sculptor 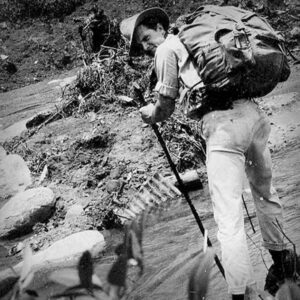 Parts of the Pan American Highway were unfinished. Costa Rica, 1959. 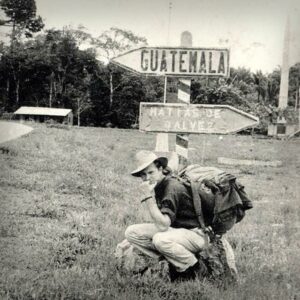 Magic Town was built to 1:6 scale. it took over 10 years to complete the original exhibit. 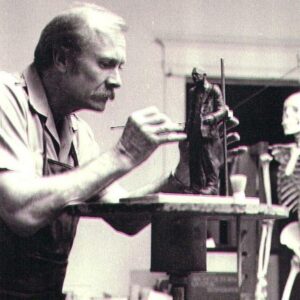 Each sculpture tells a story. Michael Garman has created over 500 sculptures over his 50-year career.

In Magic Town you can visit a recreation of Michael Garman’s San Francisco Studio.

Each sculpture is created by Michael Garman.